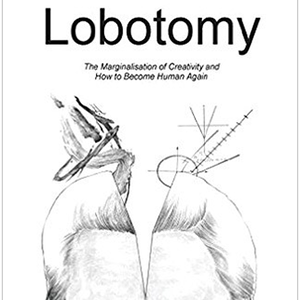 The Hole in Your Corporate Head

In the last 20 years, the interest in developing creativity as a component part of a business strategy has grown to become a priority for success. The investment in innovation processes adopted widely in the 1990’s recognised that there needs to be something in the barrel to innovate and just sitting round with a spreadsheet and a 'me too' idea wasn't going to work. Skyscraper organisations such as Apple, Google, Microsoft, Facebook and Amazon claim to be constantly embroiled in a whirlwind of creativity, their employees prodded to use their intuition and novel ideas to fund the demand for new products. Whether or not this is even close to the truth, the effect is to leave competitors in the dust. This success appears to be unstoppable. To salve this new boardroom appetite, academics and business consultants have turned their attention to the 'how to' market. Open the cupboard labelled ‘creativity and business’ and risk being buried under an avalanche of books, blogs and research flogging the next '10 steps to make your company creative' model. As with all organisational transformations this easy-way-out strategy rarely works.

The common approach will require new blood, usually in the ominous shape of a gaggle of consultants, most of whom know nothing of the distinctive nature of the business or the marketplace. An audit will be conducted, staff will be given questionnaires and a plan will be drawn up. Inevitably at the bottom of the pile marked for transformation will be you and me. We are known as human beings and it is us that can be creative - when we are allowed to be.

How did all this happen? Industrialisation brought wealth. It relied on human creativity to succeed. Inheriting the freedoms and culture of the reformation, the knowhow of the craft guilds and the expansion driven by global exploration the barriers to collaboration were slight. Science, art, business, politics and finance all worked together to build the world’s most successful civilisation. But it also brought a new corruption, one that began to undermine the engine of success. Mass production required repetition. Mass production required simplification. Mass markets brought power, power that could be used to maintain the status quo. The rewards for compliance and obedience became paramount. The rewards for unique creativity withered. Consider the realism of our modernistic world. Drowning in an ocean of me-too web sites lauded to support the claim that innovation is surging ahead. Meanwhile global problems stalk us, some of which will, if left unsolved, destroy our planet. Businesses lacking anything new to produce are racing to reduce costs by moving jobs, technology and manufacturing to low cost countries destroying the home consumer market they need to survive. As for the machine that changed the world, the automobile is still just four wheels and an internal combustion engine. Add to this health problems such as obesity and an epidemic of mental depression and throw in our young graduates with careers as coffee baristas.

We operate best when we are using our whole brain. That is a productive union of our creative intuitive ideas with our logical reasoning. Take away the link between these distinct skills and we become unfulfilled. We develop a gap or as we like to describe it 'a hole in the head'. The effect is similar to a discredited 20th Century procedure used to cure any mental malaise known as Lobotomy. Think how those now labelled as having a creative career have become stereotyped. Think how those in conventional business careers are thought of by those with a creative lifestyle. Think of the language, dress codes and behaviours associated with these new groupings. Think about the so called 'creative industries.' Think about the impact of a label like 'non-creative industry.' Think about the point at which you became one of these new labels.

Our institutions reinforce this new divide. Modern education destroys our creative spirit. We know this by measuring diverse thinking ability in children which is usually eliminated by the age of 14. Yet knowing this, our response is to adopt a policy where arts subjects are devalued in favour of emotionless brittle subjects such as physics, engineering and mathematics. Who is ever going to think outside of the box if all they ever learn is what’s in the box? Let’s add to this spiteful mix the risk assessments use to underpin financial investment which will ensure nothing new is ever built. And for good measure the motivations of so called CEOs, whose bonus depends on short term shareholder values.

There are ways to employ human beings so that their infinite and unique creative ideas can be brought to the table, used to make world-beating new products and services, solve problems and give them a fulfilling career. To get there, we need to understand how we have made a society that despises the term creativity. A society that treats creativity as a specialism and pretends that it can be reproduced by a machine. A society that amplifies a view that creativity is of lower value than following rules and repeating existing knowledge and warns us that creativity is dangerous. Equally we need to acknowledge that those who attempt to work in the creative sector have developed a jaundiced view of business. These are those who feel that dealing with money, time and markets is evil and that they deserve to be absolved from the responsibilities of managing life.

Our book is aimed at prising the lid off our attitude to creativity and business by exposing the beliefs and inconsistencies that hold us back and contribute to almost certain failure. It is aimed at finding an approach that will work for all of us at every level. Once we recognise the conditions we experience and the state of our thinking, we will be able to navigate to a high energy position where collaboration and the combined power of creativity and logical reasoning can produce sustainable success. It provides ways in which a business or personal transformation program can have a desirable beneficial impact not only for the corporate bottom line, but for the people who spend their lives trying to reach a place of fulfilment and success. Discover what can be done - begin by reading our book and taking the tests. Lobotomy – The Marginalisation of Creativity and How to Become Human Again.

To purchase this book, please visit our Amazon Bookstore.

Mike Fitzsimons - Mike graduated from Essex University in 1972, and pursued a career in music until taking a job in social research in 1975. He quickly entered the fast-growing computer sector, specialising in data analysis, and in 1985 headed-up the BBC’s IT section of their audience research team. He has given numerous talks on prediction techniques to international audiences. Mike has also played with several bands, the most notable being The Piranhas (top 10 single) and The Papers (Top 5 indie single) and was signed to EMI and Radioactive Records. Currently he has a music publishing deal in Nashville. He became fascinated in the relationship between creativity and business after working with Sue on a national government contract as an advisor.

Sue Bradley - In the 1980s, Sue worked as a musician and performer with bands and physical theatre companies such as Pookiesnackenburger and Ra Ra Zoo, touring internationally. She was a scriptwriter and actor for London Weekend Television, co-wrote and acted in her own Channel 4 TV series and was signed to Stiff records with her band. Then throughout the 1990s she was Head of Expressive Arts in a large urban secondary school. In 2001 she became Creative Director for England’s flagship creative education programme, Creative Partnerships, managed by the Arts Council, England. More recently, she has been a marketing executive for a TV station and is currently managing an employer-led creative apprenticeship scheme. Sue gave a TEDx talk on this book’s topic in 2011 to an audience of academics, journalists and the general public and has significant media experience.